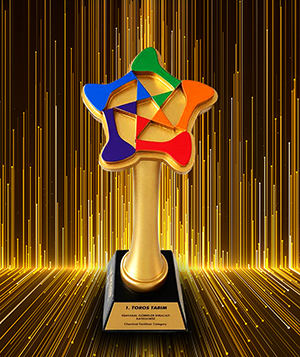 Toros Agri added a new accolade to its series of achievements by claiming the “İKMİB Stars of Export Award” for the fourth time in chemical fertiliser exports. Having previously won the same award between 2017 and 2019, Toros Agri increased its exports by 33% to 455,418 tons in 2020. The company also exported to 11 different countries, from India to Spain, in 2020.

The "İKMİB Stars of Export Award Ceremony", organized annually by the Istanbul Chemicals and Chemical Products Exporters' Association (İKMİB), was held on June 18 in order to honour and encourage its members in the chemical industry for their success in exports. At the ceremony, which was held for the sixth time this year, the top 3 companies in 35 categories received their awards. Attended by the Deputy Trade Minister of Turkey, Rıza Tuna Turagay, Turkish Exporters Assembly (TİM) President İsmail Gülle, and İKMİB Chairman of the Board Adil Pelister, the award ceremony was broadcast live on İKMİB’s YouTube channel. 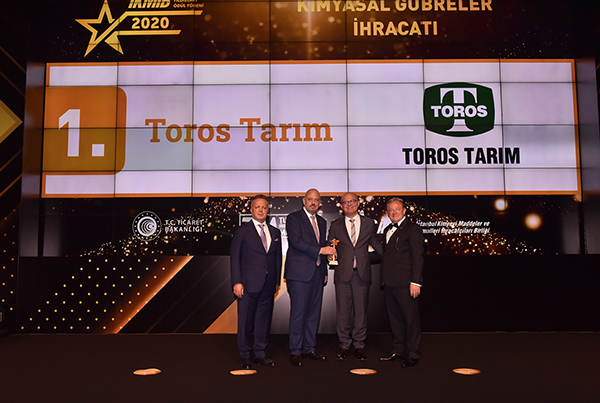 When asked about the award, Hakan Göral, Chairman of the Board of Toros Agri, stated that achieving this success for the fourth time was very meaningful for them and that they attached great importance to contributing to Turkey's foreign exchange needs. Mr. Göral also stated that although exports are an important sales channel, their priority has always been to meet the needs of Turkish farmers, and that they maximised capacity utilisation by means of exports effectively. Saying that they reached a capacity utilisation rate of 93% throughout the year despite the uncertainty and fluctuations experienced both in the global and domestic market due to the pandemic in 2020, Hakan Göral added, “Our ability to make quick decisions and an effective pandemic management, as well as keeping our export channels open played a key role in attaining this success. In 2020, we sold 2,123,290 tons, of which 1,667,871 tons were realized in the domestic market and 455,418 tons through exports. Thus, despite all the challenges in the market, we increased our sales figures above that of 2019. We also increased our exports by 33% compared to the previous year. We exported to 11 different countries, from India to Spain, with India, Kenya, Mozambique, and Ukraine taking the top four spots on the list. As a key country in agriculture, Romania also means much to us regarding our investments and future plans. We managed to increase our fertiliser exports to Romania by 57% compared to that of 2019.”

“The important thing is to establish a permanent presence in foreign markets!”

Hakan Göral, Chairman of the Board of Directors, stated that Toros Agri wants to become a regional player first with its own brand by further strengthening its geographical presence and exports, and then to expand its global footprint gradually. Pointing out to the fact that they acquired Agroport Romania S.A. in 2019 in order to expand to both Romania and therefrom to European markets, Mr. Göral also stated that Ukraine, one of the world's most important wheat producers, is another target market such as Romania, and that they have established a sales office in this country. Mr. Göral continued his words as follows:

“Strengthening our presence abroad is a strategic priority for us. Fertiliser industry is a very dynamic sector shaped by cost fluctuations due to imports, drought, farmers’ purchasing power, legal regulations, and many other factors. We need to have a flexible sales model so that we can adapt ourselves to the rapidly changing conditions, especially in the domestic market. Export is one of our musts in this regard. However, the important thing here is to establish a permanent presence in the markets we enter, and to adapt to these markets and to respond to changing needs. As in every sector, the fertiliser sector is experiencing a great transformation all over the world. Innovation is also one of the key concepts in our industry. The industry needs new perspectives and solutions in order to develop new types of fertilisers suitable for changing conditions in agriculture, to reduce the impact of fertilisers on the environment, and to gain the production and supply chain a much more efficient and sustainable structure. For this purpose, in 2017, we established the first R&D centre for plant nutrition in Turkey within our Mersin Production Plant. Here, we are working intensively on novel environmentally friendly products and production processes that will contribute to agricultural productivity. The feedback and requests we receive from domestic and foreign markets also shape our works at the R&D Centre.”

“The future of our world depends on the establishment of the circular economy!”

Stating that the fertiliser industry has a critical role in the access of humanity to sufficient food all over the world, Hakan Göral underlined that the correct use of plant nutrients is of great importance in terms of environment and sustainability. Stating that they have been trying to raise awareness in the sector with training programs for farmers on this subject for years, Göral also talked about the importance of transitioning to a circular economy in terms of the sustainability of production systems:

“The take-make-dispose linear economy model that currently dominates the world does not promise us a sustainable future. With the current system, the rate of consumption in the world has increased eightfold in the last few decades. Due to the increase in consumption, resource use is expected to triple globally by 2050. This is not a sustainable model. We have to spread the circular economy model, which ensures the use of resources as long as possible, energy savings, and reduction of waste by keeping resources in circulation. As Toros Agri, we have taken important steps in this direction for the last two years. Toros Gönen Renewable Energy Inc. (Toros Gönen Yenilenebilir Enerji A.Ş.), which we acquired in 2019, and Toros Meram Renewable Energy Inc. (Toros Meram Yenilenebilir Enerji A.Ş.), which started operating in 2020, produce biogas from the organic wastes they collect from the region and electricity from biogas, while also producing solid-liquid organic and organo-mineral fertilisers from the wastes that have completed the gasification process. Thus, they not only dispose of wastes, but also provide organic and organo-mineral fertilisers, which are extremely beneficial for the soil.”