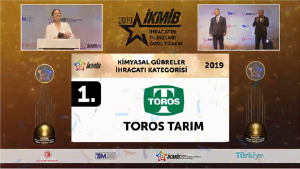 Toros Agri is Export Champion for the 3rd Time

The fifth anniversary “IKMIB Export Stars Award Ceremony”, organized to honor and encourage IKMIB member firms for their export achievements, was held online on July 7 with the participation of Turkish Minister of Commerce, Ruhsar Pekcan. A total of 140 companies that entered the top 5 in 28 categories were eligible to receive awards at the ceremony. Toros Agri became the chemical fertilizer export champion for the third time in a row, with its exports reaching 343,305 tons in 2019.

Speaking at the ceremony, broadcast live on YouTube for the first time this year due to coronavirus measures, Turkish Exporters Assembly (TIM) President Ismail Gülle said that last year IKMIB registered 20.6 billion dollars in exports, successfully representing Turkey worldwide. IKMIB Board Chairman Adil Pelister also reminded that 2019 was a year full of records in the sector, stating that chemical sector exports grew by 18.5 percent compared to the previous year and represented 11.4 percent of total country exports to finish the year in second place among other sectors.

From India to Mexico, exports to 15 countries

Toros Agri Chairman Hakan Göral stated that being the export champion in the chemical fertilizer category for the third time in a row is a source of pride for them, adding that they are very happy to contribute to Turkey's foreign exchange needs. Göral stated that their priority as a company was always to meet the needs of the local farmers, and that they saw exports as a balance element according to the conditions in the domestic market, thus maximizing capacity utilization.

Recalling that as the largest fertilizer producer in Turkey, Toros Agri has 38 percent of the total installed production capacity in the country, Hakan Göral said that in 2019 the company produced 1,677,730 tons of fertilizer with an average capacity utilization rate of 89 percent, representing a 4.6% increase in production compared to 2018 and a 3.5% rise in capacity utilization. Göral said they closed the year with records in sales as well as in production, and in addition to increasing sales in the domestic market, the company also had a positive year in exports. “In 2019, we realized a total sales of 2,094,218 tons, 1,750,913 tons in the domestic market and 343,305 tons in exports. Thus, we were able to increase our sales by 14.14% compared to the previous year. In addition to our increased sales in the domestic market, we also enjoyed a positive year in exports. We are happy to lead our sector once again with 343,305 tons of fertilizer exports and to contribute foreign currency to Turkey,” Göral said.

“Our goal is to grow our global footprint with our own brand!”

Stating that in 2019, Toros Agri exported to 15 different countries in a wide geographical region spanning from India to Africa, Romania to Mexico and that the company aims to strengthen its geographical spread with each passing year, Hakan Göral said, “As Toros Agri, we aim to become a regional player and gradually grow our global footprint with our own brand. To that end, we have taken some important steps in 2019. For example, we've incorporated Agroport Romania S.A., which operates the sales and distribution operations of Nutrien -the world's largest fertilizer producer- in Romania, in order to make Romania Toros Agri’s second-largest market, and also to contribute to our goal of expanding into the European market. Thanks to the work of our R&D center, we continuously develop our product range with new products and formulations. With our organic and organomineral fertilizer investments, we have become an important brand in this market as well. 2019 also has a special place as the year when we first exported organomineral fertilizers,” Göral said.

Stating that despite the volatile environment and uncertainties in the sector in 2019, they successfully adapted to harsh market conditions thanks to their flexible business model, Göral said that they have increased productivity in all processes through lean production, that they had the opportunity to reach farmers directly in every corner of Anatolia and to understand and address their needs, and that they realized a much more effective organization scheme based on global success stories.

Recalling that Toros Agri was honored with the “Protect & Sustain” certificate by the International Fertilizer Association (IFA) in 2018 for its efforts in line with sustainable growth, operational excellence and continuous development goals, Hakan Göral said it was a source of pride for Turkey to have Toros Agri recognized as the “Industry Stewardship Champion” by IFA in 2019 for the steps the company took towards ensuring occupational health and safety, environmental management, product safety and energy efficiency.